Less than a month after the assassination of the Rev. Dr. Martin Luther King Jr. and just a week before student protests in Paris kicked off, an anti-Vietnam War musical heralding the arrival of an era of freedom, rebellion and compassion introduced the Broadway set to the burgeoning counterculture.

After stints Off Broadway at the Public Theaterand at the now-defunct Cheetah nightclub, “Hair” opened at the Biltmore Theater on April 29, 1968. It would run for more than four years, and during its time, Robert Kennedy would also fall to an assassin’s bullet, Charles de Gaulle would flee the Élysée Palace to avoid the ire of protesters and the Vietnam War would continue unabated.

The show, written by Gerome Ragni and James Rado with music by Galt MacDermot, follows Claude, a young man on the verge of being drafted, and the group of hippies of which he is a part. It courted controversy from the beginning.

The Times’s Review: ‘It’s So Likeable.’ 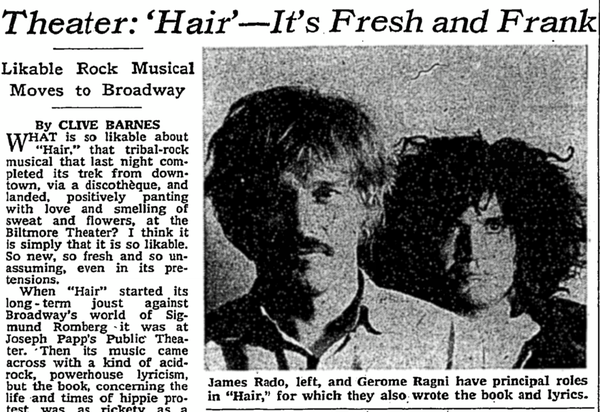 In his review from April 30, our critic Clive Barnes called it “the frankest show in town.” He wrote that letters from readers had prodded him to warn potential viewers what they could expect. “Spell out what is happening onstage,” he said he was asked.

Mr. Barnes found he was unable to comply fully. “Spell it out I cannot, for this remains a family newspaper,” he wrote. “However, a great many four-letter words, such as ‘love,’ are used very freely.”

Profanity would turn out to be among the least shocking features of “Hair.” Sexual politics, drugs and the treatment of the American flag are crucial elements of the show.

Mr. Barnes includes them in his warning: “Frequent references — frequent approving references — are made to the expanding benefits of drugs. Homosexuality is not frowned upon — one boy announces that is in love with Mick Jagger, in terms unusually frank. The American flag is not desecrated — that would be a federal offense, wouldn’t it? — but it is used in a manner that not everyone would call respectful.”

Nevertheless, he praised the show’s cast and attitude. “The show is the first Broadway musical in some time to have the authentic voice of today rather than the day before yesterday,” he wrote.

The Infamous Nude Scene
Just how many people appeared nude in “Hair” was “the subject of urgent dispute” among theatergoers during previews of the musical.

The show’s use of nudity, new for the Broadway production, would become one of its trademarks. The London premiere of the musical at the Shaftesbury Theater was delayed until Parliament abolished theater censorship in 1968 so that the production could include nudity and strong language.

New York audiences were warned about what they would see. On April 28, Marilyn Bender wrote an article about the show’s nudity in The Times. “The first act of the rock musical ends with several healthy young men facing front and center in the altogether. Just how many stark naked males there are and whether the girl hippies are equally unclothed has been the subject of urgent dispute among those who have been attending previews of ‘Hair’ during the last three weeks.”

Ms. Bender reported that the amount of nudity varied throughout the preview performances. Mr. Ragni told her, “Anybody who feels like it can take his clothes off. Everybody wants to now, even the stagehands. We turned them on.”

The nudity in “Hair” continues to push boundaries. In 2014, a production of the show in Los Angeles marked the first time full-frontal nudity was seen onstage at the Hollywood Bowl. And in 2017, a London production at The Vaults included a clothing-optional performance.

‘Hair’ and Its Cultural Relevance Today

Today, gay characters are routinely portrayed onstage, marijuana enjoys legal protection in some states and antiwar sentiment is less prevalent in the United States. Nudity, if not ubiquitous, appears onstage with some frequency. And bad language? It’s no big deal.

Though much has changed between 1968 and 2018, “Hair” continues to be relevant. Many of the cultural divides that began to express themselves in 1968 seem to still exist today. Flag burning, for example, remains a contentious issue.

Perhaps this is why “Hair” has continued to be produced so frequently. Since the first Broadway production closed in 1972, four subsequent Broadway revivals have been staged, the most recent at the St. James Theater in 2011.

Or maybe it’s just the music that drives its popularity. Mr. Barnes said in his review, “This is a happy show musically,” while also noting “Galt MacDermot’s music is merely pop-rock, with strong soothing overtones of Broadway melody.” Despite this somewhat lukewarm appraisal, Mr. Barnes wrote that the music “precisely serves its purpose, and its noisy and cheerful conservatism is just right for an audience that might wince at ‘Sergeant Pepper’s Lonely Hearts Club Band.’”

A cultural mismatch between the subjects of “Hair” and some of its audience was inevitable. “You probably don’t have to be a supporter of Eugene McCarthy to love it, but I wouldn’t give it much chance among adherents of Governor Reagan,” Mr. Barnes wrote.

Yet he also connected the show’s characters to an American archetype. “As long as Thoreau is a part of America’s heritage, others will respond to this musical that marches to a different drummer,” he wrote.

If longevity and popularity are anything to go by, that drummer beats on.

Hair’ 50 Years Later: Readers Tell Us When They Let the Sunshine In

Every week, stay on top of the top-grossing Broadway shows, recent reviews, Critics’ Picks and more

Emails may include promotional content from The New York Times. You may opt out at any time.