It would take a total of 560 gallons of paint to cover the exterior.

There is a dentist office located underneath the White House.

Although he had a hand in the design, George Washington never actually lived in the White House.

The second president, John Adams, was actually the first one to live there.

There’s actually an entire strip mall that is located underneath. It has everything from a bowling alley to a flower shop.

In 1942 the White House received a movie theatre in what used to be the cloak room.

Because of his publicly documented struggle with weight, Bill Clinton had a jogging track installed.

In 1939 the British King and Queen had a sleepover at the White House with FDR. This was the first time a British monarch had visited America.

There are a total of 35 bathrooms.

The White House initially wasn’t built with a handicapped President in mind. When Franklin Roosevelt was elected into office, the whole place had to be redone with ramps and elevators.

FDR installed an indoor pool in 1933 to help him with his polio stricken legs. A few presidents utilized the pool, but Nixon ended up laying a floor on top of it and used it as a briefing room.

The White House was the biggest home in the United States until the 1860s.

The design for the White House was chosen in a contest. The winner was Irishman James Hoban.

His design was influenced by the Leinster House in Dublin.

Because of the resources available to the chef and the size of the State Dining Room, 140 people could be served at one time.

President Truman called it the Great White Jail and the Glamorous Prison. Apparently being the top dog can get pretty lonely for some.

Running water wasn’t present until 1833, when Andrew Jackson had it installed.

Before Theodore Roosevelt, the White House was actually referred to as the Executive Mansion.

Because the British burned the house down in 1814, there is very little of the original White House remaining.

Where and How Was the Bill and Hillary Clinton 1970s “Hippie” Photo Taken? 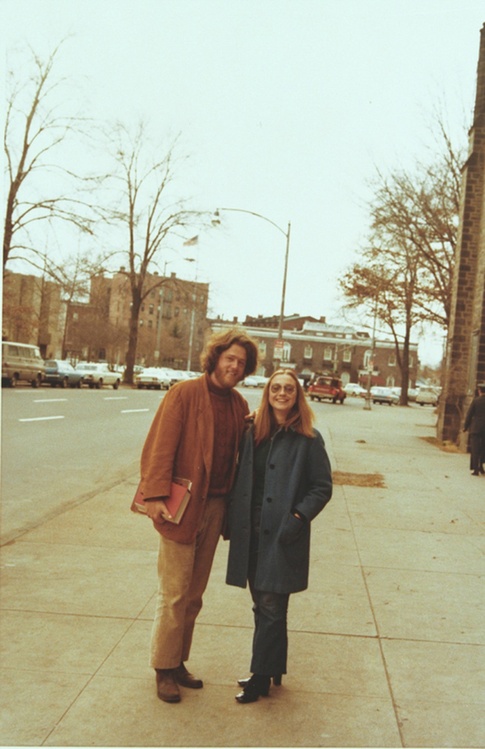 I have a photo of the same exact place and time, with Bill and Hillary in same clothes, but with my mother in the photo. Bill had given them a ride to the train station. Just uploaded it to my twitter feed: @oatespalmer.

My mother and father came to Yale in the fall of 1970, having dated and lived together in Berkeley and in Washington DC. My father was in Bill Clinton’s law class, the class of 1973. (Bob Reich, the future Secretary of Labor, was also in their year.) My mother, Marylouise Oates, received her Masters of Divinity from Yale around the same time. Hillary Rodham was in the Yale law class of 1972, even though she was younger than both Bill Clinton and my father – she went straight to Yale after she graduated from Wellesley.

Shortly after Bill Clinton was elected President, my mother found this photograph (below) in a photo album somewhere and gave me a copy. When Hillary Clinton wrote her memoir, Living History, I saw that the photograph of just her and Bill from Yale was on the back cover — and was credited only to “courtesy of author’s private collection” or something like that. I recognized it as likely being taken around the same time as the photo with my mom, and thought it could have been taken by my dad, too, but didn’t really explore it.

Probably about a year ago, people were posting the “just Bill and Hillary” Yale photo on Facebook, and I looked closely at the two photos side by side and saw that they were clearly taken at the same time and the same place — same building behind them, and Bill Clinton in virtually the exact same pose. I posted the two photographs on my Facebook page.

A few months later — just the other day — a friend who is friends with a Quora staffer sent me the link to this question. I have always wanted to see my dad, now a Superior Court Judge here in Los Angeles, given credit for taking this iconic photograph of the two Clintons.

I have the photo of the Clintons and my mom framed in my house. When I show someone the photo, I like to let them figure out who is in the picture. They inevitably have one of two responses: “HOLY $#&$ LOOK AT BILL CLINTON’S HAIR” or they ignore the Clintons completely — not recognizing them — and instead say, “Check out the boots your mom is rocking!”