The video shows a “black mist” roll into the hotel’s Campbell Room at around 1:48 AM on August 5, 2017. The footage has been circulating online since it was posted last week by the YouTube channel Strange Town, based in Austin, Texas. 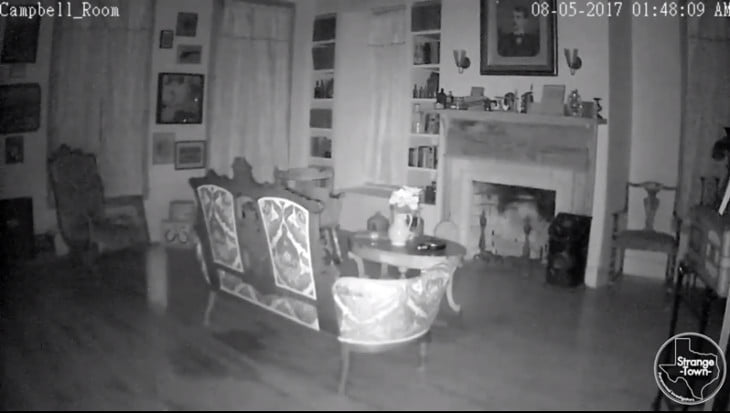 The black mist enters twice, first dissipating, then transforming into what the video describes as a “white vortex” much closer to the camera. It kind of swirls around, and you can even make out what some would possibly call a ghost orb or two.

“A spinning white vortex forms in the middle of the smoke-room while being preceded by a black mist entering the smoke-room…Boot steps are often heard on the wooden floor, and the smell of cigar smoke will appear in the air.” – Strange Town

Many aren’t convinced the video shows anything paranormal. Some commented on the possibility that the “white vortex” could just be smoke (from vaping or otherwise) from someone behind the camera.

However, the owners have stated that they were present at the time and smoking of any kind was not allowed. Others questioned if it could be AC condensation, but again, one of the building’s owners, Erin Wallace, commented that “the hotel does not have central ac only a small window unit.”

The Magnolia Hotel is, naturally, known for paranormal activity, hence the presence of investigators there in the first place. The hotel’s official website contains newspaper clippings regarding the death of Emma Voelcker, who was brutally murdered there in 1874 when she was only about 13 years old. She’s not the only one said to now roam the hotel from beyond the grave.